From high school goof off to college admissions recruiter 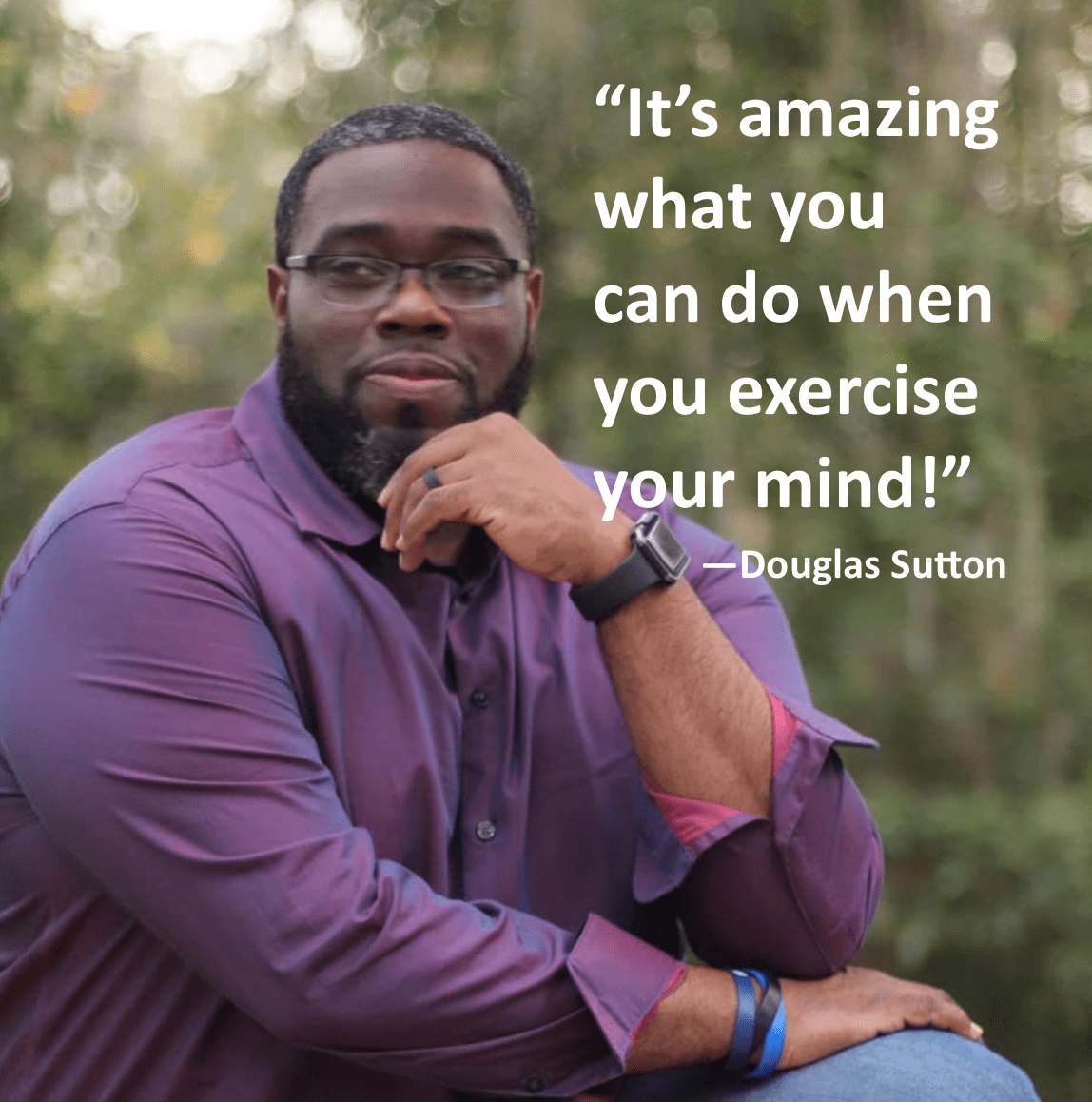 The answer to one question helped 30-year-old Douglas Sutton face his fear of school and propel him on a journey for a career.

The 2012 Adult & Community School graduate said one day his wife asked him, “If I get pregnant, can you take care of the family?”
“At first, I pushed back on the question until I got to thinking about it.” Douglas was a hard worker, so he had done pretty well for someone without a high school diploma, but he couldn’t go any higher in his job without more education. When Douglas was honest with himself he realized he wasn’t going to be able to support a family financially. “That’s when I knew I had to do something about it,” he said.

The thought of going back to school “was scary for me because I didn’t feel confident in my ability to learn. I goofed off in high school, middle school and elementary, so I didn’t even know the basics and I didn’t know how to learn,” Douglas confessed.

“There was a lot of wind rushing through the door for me to go back to school,” Douglas said he had to fight against to walk through it. “Part of the fight for me was to accept and be ok that I wasn’t where I wanted to be with my education. Once I could accept where I was, then I was able to take the reins of my life and accept that the ball was in my court! I could decide what to do with it.”

When Douglas enrolled at Adult & Community Education School he found the encouragement and support he needed. His teacher, Ms. Robinson, helped him learn how to learn. He had to work hard on his reading comprehension and his wife helped him when his work got busy and he had to miss some classes.Once he passed the GED® test Douglas said, “The sky was the limit.”

“I realized that not only could I learn, but I was actually good at it!” Douglas exclaimed. He went on to pass other tests and get certified in teaching exercise classes.

There was a poster Douglas had seen at ACE that stuck in his mind. It said, “The difference between a job and a career is an education!”
Now that Douglas had confidence in his ability to learn he was determined to pursue a career. He enrolled at Keiser University in the culinary program. “I was determined to make my college career different. I didn’t smile when I took my student ID photo because I was taking college very seriously.”

He started college with a “no excuses” mindset. “If I didn’t feel good, if I was sick I was still going to class, he said. “I set myself up for success. I got the best backpack, I formed study groups and I kept with it even though I had exercise classes to teach, and I had responsibilities to my wife and church.”

“It’s amazing what you can do when you exercise your mind!” he said.Douglas attributes being able to graduate top of his class from culinary school with determination and a good attitude. After graduating, Keiser University hired him to work in their admissions office and now Douglas goes to high schools and talks to juniors and seniors about life after high school and the benefits of working hard while you’re there. “How crazy is this?” Douglas laughed. “The one who goofed off in high school is now telling high schoolers why they don’t want to goof off!”

In addition to using his culinary background to recruit for Keiser, Douglas loves cooking for his family and friends and he appears regularly on local television station WCTV to demonstrate how to prepare recipes for viewers.

Brianna found success passing the GED® test when she didn’t give up!
November 23, 2020
Go to Top
Translate »
Register for the GED
Register for ESOL Classes