From ESOL student to ESOL teacher 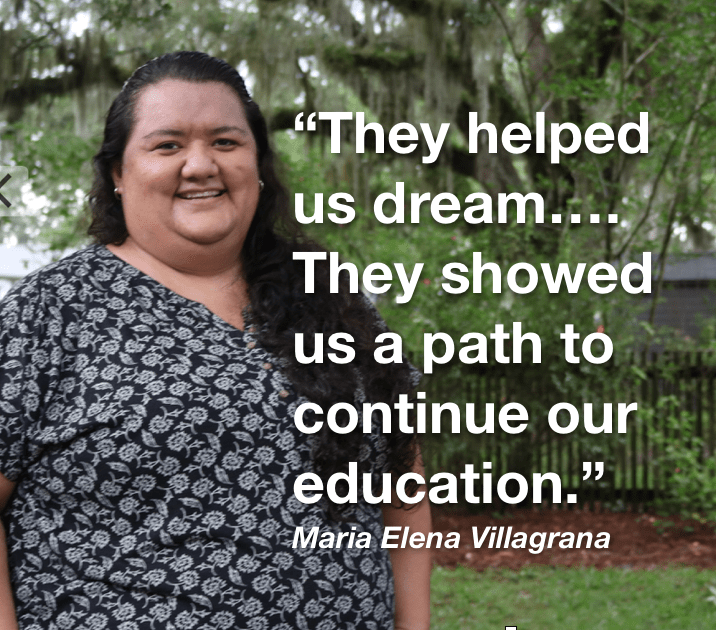 ” I could make more money if I knew English,” Maria said.

Maria Elena Villagrana worked in a call center in Mexico City in 2005. The 25-year-old’s sister lived in Florida, so she decided to visit long enough to improve her English. Maria planned to return in a year and didn’t even say goodbye to all of her friends.

What started as a year-long way to learn English turned into an entirely different course for her life after she enrolled in ESOL (English for Speakers of Other Languages) classes at Adult & Community Education School (ACE). Maria’s two English teachers, Charlie Greenwell and Christine Poreba, challenged her not only to learn English but to study for the GED® test and earn a high school diploma.

“My teachers encouraged us to prepare for life and become U.S. citizens. They helped us dream and told us we didn’t have to stop our education with a high school diploma. They showed us a path to continue our education at a vocational or traditional college,” Maria explained.

Greenwell and Poreba’s encouragement inspired her, and she decided to register at Tallahassee Community College in 2007. The former English student graduated from TCC with an associate’s degree in 2009 and enrolled at Florida State University. In 2012 she graduated with her bachelor’s degree in Spanish. Immediately Maria began graduate school at FSU and earned her master’s degree in Spanish in 2015. In 2017 Maria became a U.S. citizen.

When Maria learned that Poreba was moving out of state and Greenwell was retiring this year; she returned to thank them and share how their former ESOL student was now an ESOL teacher!

“I thank them for their encouragement and support. Without Mr. Charlie and Ms. Christine, I would have never dreamed or believed I could do more than learn a little English.”

An interesting note: A few months before Maria enrolled at ACE she met Alfred Owen. They became friends and later married. Alfred, a retired Marine, is now a High School Credit teacher at ACE.

Brianna found success passing the GED® test when she didn’t give up!
November 23, 2020
Go to Top
Translate »
Register for the GED
Register for ESOL Classes